Lights Out is a Story Chapter in Uncharted 4. It is Chapter 7 in the campaign. 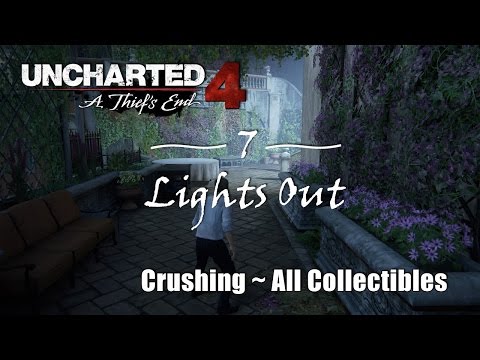 Follow the walkway up the stairs and step over the railing to the small roof. Leap across to the domed tower which triggers a tutorial. Go left and hide in the gazebo. Avoid the searchlights by moving carefully and using cover.

When the coast is clear run up the roof and jump to the ledge. Slide left and press square beneath the guard to toss him out. Climb into the tower and make your way carefully to the other side. Hang and drop to the ledge below. Make your way onto the nearby roof and grab the ledge on the next roof. Slide around the corner to the wall and go left to hang from the pole.

Time your swing to avoid the lights and leap to the window pulling yourself up quickly in to the window. Go ahead to the balcony outside. Hop over the balcony to the roof. Head around the corner and along the edge of the roof, being mindful of the searchlights. At the next building climb into the porch. Head into the tall grass. Use a stealth takedown on the approaching guards. Head up the stairs across the yard and climb onto the small roof. Climb up to the next roof, where you can see the ballroom. Go across the roof and climb on to the next roof. Grab the windowsill and climb in the window to get to the library. Exit the door to trigger a cutscene.

Fight with Nadine here. She will eventually ask for the item, you can choose 1 of 3 answers. What you choose doesn't affect the outcome so pick whichever you like best. As Nadine reaches for the item, press the square button when prompted.

From the pole, swing across the poles to the windowsill and head right and up onto the roof. Go across the roof and leap to the next roof. Leap into the covered balcony/tower. Head left and jump to the pole. Swing from the now broken pole to grab a ledge. Climb left and grab the sign to trigger a cutscene. Use the now found gun to finish off the guards. Climb over the sign and jump to the wall and climb left to the pole to swing into the balcony where the guards just were. From here you can proceed forward against the guards using either stealth or just go in with guns blazing. If you choose the quieter option be sure to watch the patterns and movements of the enemies carefully. Your goal is the building with the red flags.

Make your way into the gazebo with the 3 guards, which you can take out with a combination of stealth and pattern studying. Exit the gazebo and jump across the roof and over the wall near the red door. Take the stairs into the courtyard. You can reach the cable on the roof ahead by moving the wagon near and jumping off of it, moving the wagon to the gazebo and jumping to the gazebo and then jumping to the roof or by fighting the guards who come out when you move the wagon. They leave the door they came from open which you can enter and go upstairs and out the window to get to the roof.

Once on the roof, head to the corner where the cable is and wait for it to prompt you to jump and grab the cable which you can ride into the ballroom. A cutscene will trigger. A firefight will now break out. Clear out the entire ballrom and follow Sam out.

Head outside and fight your way downstairs and then from statue to statue. When you get down far enough Sully will drive in. Dive into the car to trigger a series of cutscenes and the chapter's end.