Hector Alcazar is a Story Chapter in Uncharted 4. It is Chapter 5 in the campaign. 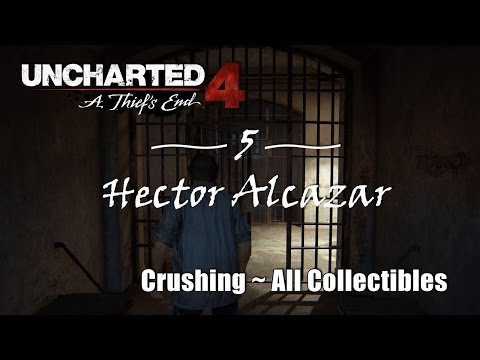 Sam's telling of his story to Nate is played out as a flashback. Once the scene ends, follow Hector down the hallway and stairs to the dead guards. Take the Aegis 9mm from Hector.

After the cells are opened, follow Hector through the doors and take cover. Defeat the gaurds and continue on through the gate. Take cover and fight your way through. Once the area is empty, you can find an MP34a on the floor. Advance into the next room.

They will blast a whole in the wall and advance out into the alley. More guards will come out onto a balcony. Head left down the alley and leap over a crate to fight a guard until Hector arrives to kill him. Continue to follow Hector, fighting guards along the way tto the laundry. Fight off the guards here and push forward. Once it is cleared, Hector's men will blow another opening. Don't wait too long here as Sam will be shot if you wait to long to proceed.

Go through the open doorway and upstairs. Climb over the fence to come to a firefight with gunmen and a powerful turret. Dodge the turret fire and take out the other gunners. Stay alive until one of Hector's men fires 3 rockets into the turret. Exit out the door and climb the stairs to trigger the explosion scene. Fight down the alley with Hector's men. Climb the scaffold on the wall ahead to see vans pulling up. Approach the vans to trigger the final cutscene.